On January 11, 1998, West Suffolk Baptist Church was chartered as an independent Baptist congregation. Forty-three professing believers signed the charter, the majority of whom had previously been members of Tabernacle Baptist Church, an independent fundamental Baptist church which had existed on the same site and had consistently sought to evangelize the surrounding communities since its founding in 1948. Pastor Ben Scofield led the congregation through that necessary transition, continued to preach the gospel and sought to teach the believers the fundamentals of the faith. He was increasingly being drawn, however, to reconsider the practical implications of his somewhat Arminian background and the overall soundness of his seminary training. He was ultimately led, by the grace of God, through a combination of further seminary training, the extensive reading such an undertaking demands, and the practical realities of full-time ministry, to embrace the doctrines of grace as the most scripturally sound and biblically faithful expression of that gospel. Under his leadership the overall congregation of WSBC was gradually led to the same convictions. Viewed in retrospect, Pastor Scofield and WSBC were progressively becoming reformed Baptists, though they didn’t know such a category existed. 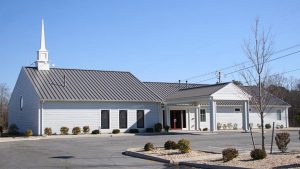 Five years later, in the providence of God, Pastor Robert Stovall was dismissed from the pulpit of a local Southern Baptist church, in part because of his commitment to the doctrines of grace. A significant number of believers, having under his teaching been themselves convinced of those same doctrines, asked him to lead them in forming a separate congregation. Believing it to be the will of the Lord he consented and by the grace of God over the next few months Providence Baptist Church was established. The immediate need for a meeting place to conduct services was remedied through the Lord’s providence in establishing a deepening friendship between Pastors Scofield and Stovall over the preceding few years. Their pastoral hearts were knit together by a love for the church and a desire to see God’s people grow in their understanding of and obedience to His will. Their mutual embrace of the doctrines of grace provided a foundation upon which to build a lasting and fruitful relationship, and within months of its founding PBC accepted WSBC’s offer to use its building and facilities on a mutually compatible schedule. Again by God’s providence, over the next six years both congregations, through combined services, mutual trials and edifying times of fellowship, developed a warm and close relationship with one another.

In 2007, Pastor Stovall and PBC, seeking a reformed credentialing agency for one of its elders, a military chaplain, contacted the Association of Reformed Baptist Churches of America (ARBCA) and after prayerful reflection by all parties, were not only accepted into the association, but PBC’s elder, Patrick Joyner, became ARBCA’s first military chaplain. It was reassuring to all concerned to learn that there were other Baptist believers who had rediscovered the reformed faith.

As it became increasingly obvious the two congregations were functioning as one, both pastors were led to understand that they should be in name what they were in practice, united as one body. In time, each congregation voted to pursue a merger. WSBC, as part of that process, formally adopted the 1689 Second London Baptist Confession of Faith as its doctrinal foundation. By God’s grace, and through His mercy, all the obstacles were overcome, and in November 2009, PBC and WSBC formally united, choosing to retain the latter’s name, in keeping with the scriptural pattern of identifying churches by their geographical location. Once that process was complete, Pastor Stovall felt led by his evolving theological convictions to seek ordination in the PCA, where we pray the Lord will use him for the glory of His name. Even at that point it would be hard to overstate the significance of the spiritual transition the unified saints of WSBC had already experienced, and yet, there was another change to come.

In the midst of all the above, the Lord was at work to effect an equally great transition in the physical location of WSBC within the community it sought to serve. Over the previous decade a number of investors had periodically expressed interest in purchasing the property upon which WSBC held its services. None had proven serious until in 2009 a major developer made an offer which included donating a far-better site, providing sufficient funds to build a new church building on that site, and allowing WSBC to remain in its original facility until the new one was completed. In June 2011, we held our first services in the new facility given to us by our gracious God. We continue to thank Him for His steadfast love, and to marvel at His wondrous works on our behalf.

To Him be all the glory!